The Flood, the Philistines, and the TOLeDOT Tablets

I am working on getting into the swing of things teaching 6 classes at a classical Christian school, and musing, as I have time, about whether to do a Part IV to my “The Reformed Faith and Me” series. I didn’t get it all wrapped up with three parts, but I don’t want to drag out the “autobiography” thing too long, either. I’ll see about that fourth part, and if I can reasonably finish talking about the issues and bring it to a close with that. Bear with me.

In the meantime, I have been doing a good bit of personal reading on various matters related to biblical archaeology and the interfaces between other kinds of science and Scripture, and have found some really fascinating things. I’ll chronicle them briefly, because I don’t have time to go into them in great detail right now.

First is Ian Wilson’s book Before the Flood. I don’t know anything about Wilson or his work outside of this book, so if you do, any input you may have would be helpful to me. Before the Flood, at least, is a very interesting book. Much of it is devoted to chronicling a recently-published theory that the stories of a catastrophic, world-altering Flood that abound in many religions may be based on a real event. Wilson chronicles the seeming discovery of several scientists from various nations working over several decades that about 7,000 years ago, the Black Sea was catastrophically flooded by the Mediterranean Sea. This wiped out an entire advanced civilization, altered the landscape dramatically, and gave rise to a sort of indelible “racial memory” of a Great Flood which has subsequently been preserved in many variations – among them the Noah story of the Bible and the Epic of Gilgamesh.

Wilson’s chronicle of the theory about the Black Sea Flood is extremely fascinating, and insofar as what he presents in the book and how he arranges it, the evidence seems fairly persuasive. Of course, one has to observe that among Christians there will be all the usual disputes about the accuracy of the dating methods used to determine when the Black Sea Flood happened, but that it happened seems demonstrated clearly by the discussion in the book. However, at least the last third of the book is devoted to attempting to prove that the civilization that got wiped out by that Flood had a well-developed and generally civilized sort of Mother Goddess religion, and that although this was retained in various forms by the survivors of the Flood, later it was forcibly suppressed by intolerant, patriarchal, Semitic monotheists (you see where this is going). I did not enjoy the last third or so of the book as much as I enjoyed the first two thirds, but I would still probably recommend it to those who interested in such things.

Second is Trude Dothan’s and Moshe Dothan’s People of the Sea: The Search for the Philistines. 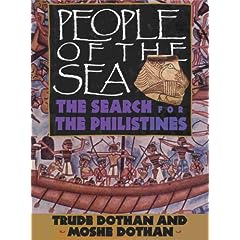 From my studies of Greek history, I was already aware that following the Trojan War (ca. 1250 B.C.), Greece entered a long “dark age” brought on by the violent destruction of the then-dominant Mycenaean civilization. Later chroniclers (by “later” I mean over 400 years later) held that a mysterious group of invaders called “the People of the Sea” swept over the Greek islands and systematically, brutally destroyed the palaces and cities, setting the Greeks back centuries.

The archaeological sources I had consulted before were unsure just who these “People of the Sea” were, but the Dothans present some fascinating evidence that (1) they were allies of the Trojans, and (2) at least one contingent of the larger group was the biblical Philistines. Initially beaten when the Greeks sacked and destroyed the Trojan power in Asia Minor, the “Peoples of the Sea” subsequently swept across the Mediterranean pillaging and razing everything and everyone they could find. At last, in approximately 1191 B.C., the Philistines in particular made a frantic assault on the Egypt of Pharoah Rameses III, and were stopped at great cost to the Egyptians. At that point, the Philistines decided to settle down in, of all places, the biblical Canaan. About a hundred years later (1090s B.C.) came the Davidic Kingdom, under which so much of the Israelite’s trouble with the Philistines arose.

I haven’t finished this book yet, but the whole thesis about the Philistines is just terribly fascinating. Another highly recommended read.

Lastly, thanks to the rank “demythologization” efforts of Wilson in Before the Flood, I decided to take a look again at some of my older “Bible and Science” types books in order to refamiliarize myself with some of the contested issues, such as the dating methods by which scientists determine how various events and artifacts are to be classified and arranged on the timeline. Since one of the corollary suppositions put forward by the particular scientists who generated the Black Sea Flood theory is that the Bible’s account of the Flood was written much, much later than the other “Mother Goddess” worshippers’ accounts, and is likely derivative from them, I poked around in my books looking for whatever I might be able to find as counterarguments.

I found one very interesting thing in Marvin Lubenow’s Bones of Contention. This was a very interesting argument, via P.J. Wiseman in the 1930s, that the book of Genesis was actually written by many hands and only later “redacted” by Moses. Lest this sound like a quacky Liberal attack on the veracity of Genesis, let me hasten to say that according to Lubenow, many conservative Bible scholars embrace Wiseman’s theory because in fact it has the end result of providing evidence that Genesis 1-11 are actually (as Lubenow puts it) “transcripts of the oldest writings in human history.” How does this work?

Because I do not claim to fully understand the theory, and at any rate, I do not possess the qualifications in Old Testament studies to confirm or argue against the theory, I will only recount what Lubenow says, and leave it to the reader to disagree or do follow up reading. Basically, the idea is that the phrase “These are the generations of…” (TOLeDOT in Hebrew), repeated 11 times in Genesis, are ancient Mesopotamian “colophons,” or declarations of the name of the author of the document in question. These “colophons” were always put at the end of a particular record, and so whenever we find the phrase “These are the generations of…” in Genesis, we know that we have reached the end of a particular record and are about to start a new record. This in turn means that Genesis 2:5-5:2 was originally written by Adam or his immediate kin, that 5:3-6:9a were originally written by Noah or his family, that 6:9b-10:1 were written by Shem or his family, that 11:10b-11:27a were originally written by Terah (father of Abraham), and so forth.

The role of Moses in all of this, given that the book of Genesis itself (unlike the other four books of the Pentateuch) nowhere says that Moses wrote it and that we know he was thoroughly trained in the best of the sciences of the Egyptians, was as the editor / compiler / redactor of the (probably clay tablet) copies of all of these original documents. So in a sense Moses did “write” the book of Genesis, but in the sense of putting together numerous ancient records into one continuous story – which makes Genesis, as Lubenow said, “transcripts of the oldest writings in human history.” One other thing Lubenow points out is that usually the arguments that no written records could have existed so far back in history are derived from evolutionary assumptions about “primitive” man and what he was and was not capable of doing. Speaking as a believer in creation, though, Lubenow seems correct when he says that if Adam was created with the ability to speak, it is silly to imagine that he could not also write, since speaking and writing are parts of the same complex phenomenon of language.

At any rate, this is the sort of stuff I’ve been reading in my spare time lately. Pretty fascinating, all of it!

This entry was posted in Christianity and Modern Science, Scripture and Archaeology. Bookmark the permalink.